In the Kemerovo region, scientists from Tomsk and St. Petersburg discovered a new dinosaur species as thy were studying the bones of a giant lizard. 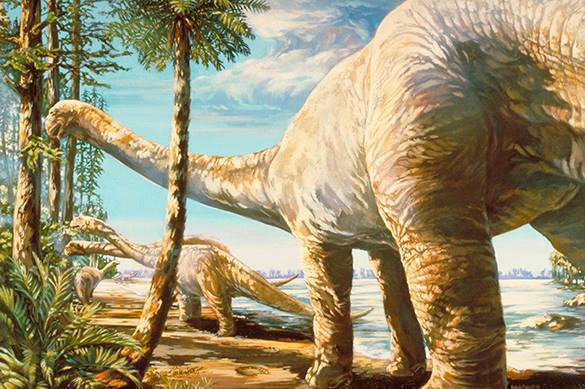 According to the press-service of the Tomsk State University, the newly discovered ancient lizard has a specific construction of the skeleton and has never been found in any other country of the world before. The herbivorous dinosaur lived on our planet about 100 million years. The creature  had no articulation of the vertebra in the neural arch, whereas its sacral ribs converge toward the center in the shape of a star.

The dinosaur inhabited modern-day Western Siberia and weighed about 50 tons; its body was about 20 meters long.

The fragments of the dinosaur skeleton were found in 1995 on the right bank of the river Kiya in the Kemerovo region. It took scientists years to extract the bones from sandstone. The scientists established that the lizard belonged to the suborder of sauropods, but appears to be a  representative of a new species.

The paleontologists currently collect the remaining fragments of the ancient lizard. They have already joined the large bones of the dinosaur and assembled a portion of the shoulder blade and cervical vertebrae. The scientists believe that the skeleton of the dinosaur should be exhibited in the main building of Tomsk State University.