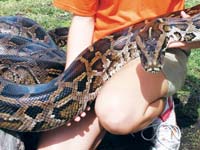 The African rock python is considered more aggressive than other python species and has been known to consume goats, wart hogs and crocodiles in its native environment.

The first rock python, a 9-foot female with eggs, was found in May after it was hit by a car in west Miami-Dade County just east of Everglades National Park. The second, a 28-inch juvenile male, was found in August in the same area.

"We're not sure whether it's someone releasing them or not," said Scott Hardin, exotic species coordinator for the Florida wildlife commission. "It's enough to be concerned."

Invasive Burmese pythons now number in the thousands in the Everglades. A proliferation of rock pythons could further destroy native wildlife and damage already stressed wild lands, according to United Press International's report.