South Africa announced the launch of clinical trials of the first AIDS vaccines created by a developing country with assistance from the U.S. on Monday. 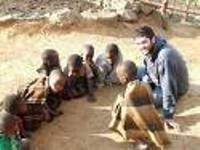 It represented a feat by scientists who overcame skepticism from colleagues and from some political leaders who shocked the world with unscientific pronouncements about the disease, The Associated Press reports.

Trials will conducted on 36 healthy volunteers, the news agency said, citing Anthony Mbewu, president of the state-backed council. A trial of 12 volunteers began in the U.S. earlier this year, it said.

South Africa has the world’s highest number of people living with HIV, the virus that causes AIDS, with more than 5.2 million people infections, the news agency said, Bloomberg reports.

“Countries around us with fewer resources, both human and financial, are able to achieve more,” said Dr. Quarraisha Abdool Karim, the first director of South Africa’s national AIDS program in the mid-1990s under President Nelson Mandela. “I wish I understood why South Africa, which has an enviable amount of resources, is not able to respond to the epidemic the way Botswana and Kenya have.”, New York Times reports.