Dental fillings of silver color may be poisonous to pregnant women, fetuses and children due to their mercury content, the US Food and Drug Administration said in a statement Wednesday. The statement was released after settling a lawsuit filed by several consumer advocates. 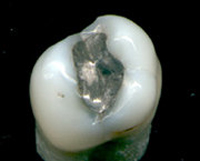 The FDA posted a warning message for consumers about the risk on its website. In addition, the DA will issue a more specific rule for mercury-containing fillings by July of 2009.

It is an open secret that millions people in the world have the metal fillings containing mercury in their mouths. Such fillings are called amalgams. Amalgams may produce a neurotoxic effects on the nervous system of developing children and fetuses.

Amalgam is a commonly used dental filling that has been used for over 150 years. It is a mixture of mercury with at least one other metal. Currently, dental amalgams are composed of about 40% mercury, and 60% powder where the powder is made up of silver (~62%), tin (~26%), copper (~10%), and zinc (~2%). Amalgam has many advantages over other restorative material, such as low cost, strength, durability, and bacteriostatic effects. Its main disadvantages are poor aesthetics on anterior teeth and the known toxicity of mercury. Concerns about possible detrimental health effects from the low levels of mercury released from amalgam have resulted in a decline in the routine use of amalgam in recent years.

Amalgam is a versatile restorative material and is used in dentistry for a number of reasons. It is inexpensive and relatively easy to use and manipulate during placement; it remains soft for a short time so it can be packed to fill any irregular volume, and then forms a hard compound. Amalgam possesses greater longevity than other direct restorative materials, such as composite. On average, most amalgam restorations serve for 10 to 12 years, whereas resin-based composites serve for about half that time. However, with recent improvements in composite material science and a better understanding of the technique-sensitivity of placement, it should be noted that this difference is decreasing.

Dental amalgam is a source of low-level exposure to elemental mercury, and concerns have been raised about whether this poses a health hazard, for example migraines, erethism, and multiple sclerosis. As of 2008, the use of dental amalgam has been restricted in Sweden, Norway and Finland, and a committee of the US Food and Drug Administration (FDA) has refused to ratify assertions of safety.