One affected with tuberculosis in Douglas County

County health officials reported a high school student in Omaha has been diagnosed with tuberculosis. 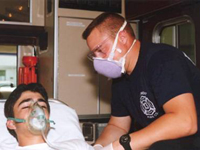 One affected with tuberculosis in Douglas County

County officials say Centers for Disease Control Numbers show that there were 10 cases of tuberculosis in Douglas County last year, and more than 13,000 in the country.

The bacterial infection can be spread through coughing and laughing, and is considered treatable.