The 137 people who got sick at an Easter buffet at Claudia Sanders' Dinner House in Shelbyville, Ky., may have been affected by a staph bacteria, officials said. 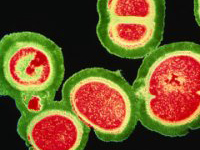 State health officials say preliminary results from the Kentucky State Lab suggest staphylococcus aureus might be the source of the food poisoning.

All food products suspected to be exposed to the bacterium were exterminated and there is spit and polish about the restaurant.

Staphylococcus aureus and also known as golden staph, is the most common cause of staph infections. It is a spherical bacterium, frequently living on the skin or in the nose of a person. Approximately 20–30% of the general population are "staph carriers".

Staphylococcus aureus can cause a range of illnesses from minor skin infections, such as pimples, impetigo (may also be caused by Streptococcus pyogenes), boils, cellulitis folliculitis, furuncles, carbuncles, scalded skin syndrome and abscesses, to life-threatening diseases, such as pneumonia, meningitis, osteomyelitis endocarditis, Toxic shock syndrome (TSS), and septicemia. Its incidence is from skin, soft tissue, respiratory, bone, joint, endovascular to wound infections. It is still one of the four most common causes of nosocomial infections, often causing postsurgical wound infections.