Longer education heightens your chances to live longer, a new study by the Harvard School of Medicine suggests. 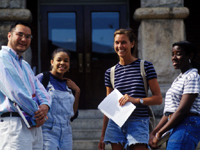 Ellen R. Meara, an assistant professor of health care policy at Harvard Medical School and colleagues collected data on people who took part in the National Longitudinal Mortality Study. The researchers used death certificates, plus estimates from Census data, to create two datasets, one covering 1981 to 1988 and the other from 1990 to 2000.

Life expectancy is the average number of years a human has before death, conventionally calculated from the time of birth, but also can be calculated from any specified age.

Meara describes the reasons, which have led to this increase in life expectancy. One of them seems to be smoking and the illnesses it causes. The less educated have not given up smoking to the extent that those with higher education levels have.

Meara underlined that even “if you hear that life-expectancy lengthening and it’s getting better, it’s important to remember that isn’t the case for everyone.”

The researchers have concluded that creating a wider net of health-awareness programs in less-educated people is the only way to increase their life expectancy.