Most countries, including the United States, are taking no significant action to arrest warming, despite overwhelming scientific evidence from the Nobel-prize-winning Intergovernmental Panel on Climate Change that they should. And while a Yale/Gallup/ClearVision Institute poll last year shows that 71 percent of Americans think warming is a real problem, no change in their lifestyle can be seen. 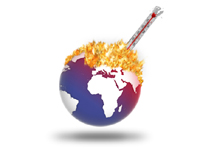 By the year 2100, according to the IPCC reporp and newer science, those changes will include a sea level rise of 5 to 10 feet; a roughly 30 percent global drop in crop yields with resulting malnutrition and starvation; hundreds of millions of climate refugees; erratic and more severe weather; frequent broad-scale forest fires; potable water shortages; a roughly 30 percent rate of global species extinction, and much more — in short, a very different and more hostile world.

Some of the impediments appear to be issues people might deal with comparatively easily; others are ideological, value-rooted and difficult. Perhaps, with a better understanding of people’s reluctance to act, they’ll be motivated to undertake the changes required for sustainability.

It’s important to understand the reasons for human inaction.

To start with, global warming’s harm is in the future, and people tend to ignore future harm. Humans often dismiss the future, and focus instead on the present. Warming is actually in evidence today, but so far only amounts to one degree on the Centigrade scale. That does not seem too harmful, and hence there’s little motivation to act.

To gain such motivation, people need to make the effort to imagine the radically compromised environment the IPCC scientists envision if population don’t reduce emissions.

People have to stop polluting.

The huge volume of carbon dioxide from broad-scale fossil fuel burning is a pollutant, but it’s ignored because it’s invisible and odorless. Now, accumulated in the atmosphere as a potent greenhouse gas, it is our single most serious problem.

But they cannot predict consequences with a high degree of specificity — that is why the IPCC predicts both a specific temperature increase by 2100 of 7.2 degrees on the Fahrenheit scale, and also a range — 4.3 degrees to 11.5 degrees.

So far, millions of people are insulated from warming by our wealth. If drought reduces some food we want, we simply pay more to bring some in from elsewhere. If flood-protecting levees are needed, we can afford them. When it is too warm one can switch on the air conditioning.

But more than 1 billion people in the world live on $2 a day or less, and have no cushion against the ill effects of warming. Generally, they contributed almost nothing to greenhouse gasses. But for them, the consequence of warming will be more suffering and premature death.

Soon, even our wealth will prove inadequate to insulate us from the likely effects — social and ecological — of warming. A 2003 Pentagon study predicted widespread chaos based on just one of the global warming consequences.

Our use of energy from fossil fuels causes warming.

Warming’s harm to our children, grandchildren and all children must be arrested.

Absolute “proof” regarding the exact consequences of doing nothing is unavailable.

Our wealth temporarily insulates us from an urgent and chaotic reality.

We have to save ourselves — we have no effective leaders.

Incredibly, accepting those six realizations is the easy part. Here is the hard part — the core of our aversion to taking action:

We have no assurance that alternative, non-polluting energy sources can replace our current energy use, or even large parts of it. It seems unlikely that we can reduce carbon dioxide emissions as much as needed (an 80 percent reduction from 2000 global levels, according to the 2007 IPCC Report) and not radically reduce our per capita energy use.

No one knows how much non-emitting energy we can develop, because that depends mostly on new or improved technologies. But the reduction will change our lives, because we are highly dependent on cheap and plentiful fossil fuel energy. Fluorescent bulbs and hybrid cars, for example, are good — but woefully inadequate — responses.

Reducing energy use violates cultural norms. We worship growth in the economy, in population and in material goods. It is a hysterical obsession: for example, news reports commonly say that the economy is slowing, when in fact it is only the rate of growth of the economy that is diminishing. No one can imagine negative growth. Circumstances that might entail economic contraction, such as cutting emissions to avoid high rates of warming, seem totally unacceptable.

Surely we ought to be able to fight against warming — a far greater threat — with a similar willingness, passion and good cheer.