Capcom's download shooter Rocketmen will be out on Xbox Live Arcade and PlayStation Network this week, the company has revealed. 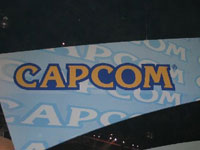 The colourful blaster is based on the card game of the same name, letting players create their own blue-haired spaceman before shooting lasers at baddies all day long.

It looks like the top-down blaster (which plays a bit like Geometry Wars mashed with Gauntlet) will be on XBLA this Wednesday, and European PSN in about a year (if its track record is anything to go by).

Capcom Co., Ltd. is a leading Japanese international developer and publisher of video games headquartered in Osaka, Japan . It was founded in 1979 as Japan Capsule Computers, a company devoted to the manufacturing and distribution of electronic game machines.

Rocketmen is constructible strategy game produced by WizKids and released in 2005 and discontinued in 2006. Part of its marketing included animated adventures based on the character of Nick Sion, a rebel and adventurer facing the evil alliance of Terra and Mars. Recently announced by Capcom, Rocketmen: Axis Of Evil, a downloadable arcade style video game based on the constructible strategy game.