The construction of Large Hadron Collider (LHC), a particle accelerator and hadron collider located at CERN, is finally terminated. Engineers have lowered the final major piece of the facility's ATLAS particle detector into the ground. 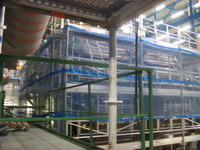 The LHC is expected to become the world's largest and highest-energy particle accelerator. When activated, it is theorized that the collider will produce the elusive Higgs boson, the observation of which could confirm the predictions and 'missing links' in the Standard Model of physics and could explain how other elementary particles acquire properties such as mass. The verification of the existence of the Higgs boson would be a significant step in the search for a Grand Unified Theory, which seeks to unify three of the four fundamental forces: electromagnetism, the strong force, and the weak force. The Higgs boson may also help to explain why the remaining force, gravitation, is so weak compared to the other three forces. In addition to the Higgs boson, other theorized novel particles that might be produced, and for which searches are planned, include strangelets, micro black holes, magnetic monopoles and supersymmetric particles.

ATLAS (A Toroidal LHC ApparatuS) is one of the six particle detector experiments (ALICE, ATLAS, CMS, TOTEM, LHCb, and LHCf). The experiment is designed to observe phenomena that involve highly massive particles which were not observable using earlier lower-energy accelerators and might shed light on new theories of particle physics beyond the Standard Model.

ATLAS is designed as a general-purpose detector. When the proton beams produced by the Large Hadron Collider interact in the center of the detector, a variety of different particles with a broad range of energies may be produced. Rather than focusing on a particular physical process, ATLAS is designed to measure the broadest possible range of signals. This is intended to ensure that, whatever form any new physical processes or particles might take, ATLAS will be able to detect them and measure their properties. Experiments at earlier colliders, such as the Tevatron and Large Electron-Positron Collider, were designed based on a similar philosophy. However, the unique challenges of the Large Hadron Collider - its unprecedented energy and extremely high rate of collisions - require ATLAS to be larger and more complex than any detector ever built.