Another poke at the effort to develop defense against sexually transmitted diseases. Recent trials have shown that a cream designed to protect women from the AIDS virus could not prevent infection. 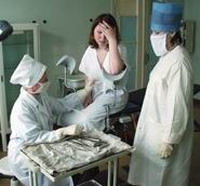 Carraguard, considered one of the safe and effective topical microbicides, was proved to be safe but ineffective.

Microbicides are products that might be applied to condoms or directly to the genitals to block sexually transmitted diseases (STDs), such as HIV. It is hoped that these products could be produced inexpensively and distributed freely worldwide. A successful microbicide product would be of particular benefit to women in countries where culturally-accepted, abusive relationships make it difficult or impossible for women to negotiate condom use.

For more than a decade, public health professionals recommended nonoxynol-9 for use as a topical microbicide, and many condom and sexual lubricant brands incorporated nonoxynol-9 for this purpose. However, subsequent clinical research showed that nonoxynol-9's irritating detergent effects can result in the formation of erosions or sores in the vagina or rectum.

Despite the false start with nonoxynol-9, there has been significant recent progress. Several different gel formulations, including Carraguard, PRO 2000, and BufferGel are currently undergoing testing in phase III clinical efficacy trials and about two dozen other products are in various phases of development. In most cases, it is hoped that the gels will block the transmission of HIV, as well as other STDs, such as human papillomaviruses (HPVs) and herpes simplex viruses (HSVs). For example, carrageenan, the active ingredient in Carraguard, has been shown to block the replication of all three virus types in laboratory studies. Interestingly, carrageenan is already in use as a gelling agent in some over the counter personal lubricant products, such as Bioglide, Divine, and Oceanus Carrageenan brands. Viva Gel is a particularly unique microbicide in that its active ingredient is a nanoscale dendrimer and 85-100% effective at stopping the transmission of both HIV and genital herpes in macaque monkies. The NIH and NIAID have awarded grants totaling $25.7 million for VivaGel's continued development and testing. VivaGel is also being evaluated for use in condoms by a leading manufacturer.

The results of Carraguard’s trial are quite dubious. The tests were started in March 2004 and involved 6,202 women in South Africa. Half of the group got Carraguard, a tasteless, odorless gel made out of seaweed, and half got placebos.

3 years later 134 women using Carraguard became infected and 151 women given the placebo did.

On the one hand, the given difference was not statistically significant, but on the other hand this product did not worsen the risk of infection.