Homosexual men transmit dangerous bacteria that cause life-threatening and disfiguring infections, a study finds. The strain of the potentially deadly superbug appears outside hospital walls in the gay community of San Francisco, Boston, New York and Los Angeles, researchers say. 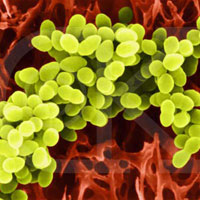 Gay men in San Francisco are 13 times more likely to be infected with the bacteria than heterosexual men. Scientists say that it will be impossible to stop the further spreading of the superbug once it reaches the general population.

The microbe, Staphylococcus aureus, or MRSA, killed about 19,000 U.S. citizens in 2005. The incidents mostly occurred in hospitals. About 30 percent of all people living in the world today carry ordinary Staphylococcus chronically. It is transmitted by touching infected people or surfaces and objects where it was deposited.

MRSA causes serious infections that penetrate deep inside tissue if it enter the human body through a wound. MRSA normally lives in and around the anus and can thus be passed between sexual partners, especially gay men. Staph infections often look like red dots on the skin. The infected area is likely to swell suppurate if left untreated. The best way to avoid the dangerous infection (it can be treated with expensive antibiotics) is to regularly wash hands and genitals with soap and water.

Staphylococcus aureus, literally "Golden Cluster Seed" and also known as golden staph, is the most common cause of staph infections. It is a spherical bacterium, frequently living on the skin or in the nose of a person. Approx imately 20–30% of the general population are "staph carriers." Staphylococcus aureus can cause a range of illnesses from minor skin infections, such as pimples, impetigo (may also be caused by Staphylococcus pyogenes), boils, cellulitis folliculitis, furuncles, carbuncles, scalded skin syndrome and abscesses, to life-threatening diseases, such as pneumonia, meningitis, osteomyelitis endocarditis, Toxic shock syndrome (TSS), and septicemia. Its incidence is from skin, soft tissue, respiratory, bone, joint, endovascular to wound infections. It is still one of the four most common causes of nosocomial infections, often causing postsurgical wound infections.