Evolutionary change in women's backs prevents them from toppling when pregnant

Scientists found out why pregnant women do not lose their balance and topple over despite ever-growing weight up front. 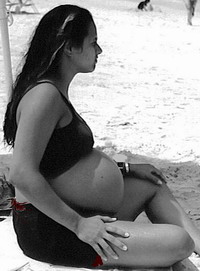 Evolutionary change in women's backs prevents them from toppling when pregnant

Evolution provided them with slight differences from men in their lower backs and hip joints, allowing them to adjust their center of gravity, new research shows.

This elegant engineering is seen only in female humans and our immediate ancestors who walked on two feet, but not in chimps and apes, according to a study published in Thursday's journal Nature.

"That's a big load that's pulling you forward," said Liza Shapiro, an anthropology professor at the University of Texas and the only one of the study's three authors who has actually been pregnant. "You experience discomfort. Maybe it would be a lot worse if (the design changes) were not there."

Harvard anthropology researcher Katherine Whitcomb found two physical differences in male and female backs that until now had gone unnoticed: One lower lumbar vertebra is wedged-shaped in women and more square in men; and a key hip joint is 14 percent larger in women than men when body size is taken into account.

The researchers did engineering tests that show how those slight changes allow women to carry the additional and growing load without toppling over - and typically without disabling back pain.

"When you think about it, women make it look so very damn easy," Whitcomb said. "They are experiencing a pretty impressive challenge. Evolution has tinkered ... to the point where they can deal with the challenge.

"It's absolutely beautiful," she said. "A little bit of tinkering can have a profound effect."

Walking on two feet separates humans from most other animals. And while anthropologists still debate the evolutionary benefit of walking on two feet, there are notable costs, such as pain for pregnant females. Animals on all fours can better handle the extra belly weight.

The back changes appear to have evolved to overcome the cost of walking on two feet, said Harvard anthropology professor Daniel Lieberman.

When the researchers looked back at fossil records of human ancestors, including the oldest spines that go back 2 million years to our predecessor, Australopithecus, they found a male without the lower-back changes and a female with them.

But what about men with stomachs the size of babies or bigger? What keeps them from toppling over?

Their back muscles are used to compensate, but that probably means more back pain, theorized Shapiro, who added: "It would be a fun study to do to look at men with beer bellies to see if they shift their loads."