Georgia's president Mikhail Saakashvili accused Russia Tuesday of trying to influence Georgia's internal politics after a one-ton missile dropped by an aircraft landed in the Gori region. Meantime Russia's officials denied its aircraft dropped the missile, which finally did not explode. 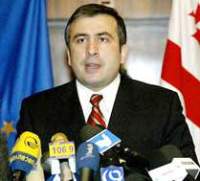 Georgia said two Russian Su-24 jets entered Georgia's airspace over the Gori region, about 60 kilometers (35 miles) northwest of the capital late Monday, and fired a missile that landed 25 meters (yards) from a house on the edge of Shavshvebi village.

"This was a provocation aimed only at one thing, at disrupting the peace in Georgia, which would cause panic in society and ultimately change the political course of the country," President Mikhail Saakashvili said at the site.

Georgia has long accused Russia of trying to destabilize the ex-Soviet republic and of backing separatists in its breakaway regions of Abkhazia and South Ossetia, which Saakashvili has pledged to bring back under central government control.

The Gori region where the missile was dropped is next to South Ossetia.

The Foreign Ministry summoned Russia's ambassador to hand him Tbilisi's formal protest, calling the intrusion and firing of the missile "undisguised aggression and a gross violation of sovereignty of the country."

Ambassador Vyacheslav Kovalenko told reporters after receiving the note that Russian aircraft had not dropped the weapon. "It was not in Russia's interest," he said.

Gen. Marat Kulakhmetov, commander of Russian peacekeepers patrolling South Ossetia, said an unidentified aircraft dropped the missile after flying over South Ossetia and coming under fire from the ground. Kulakhmetov suggested that the plane came from Georgia.

Television footage of the crater caused by the missile indicated that it had fallen straight down, rather than entering the ground at an angle, which it would do if it had been fired. Sappers were shown exploding the missile.

Interior Minister Vano Merabishvili said in televised comments that Georgian radars spotted the Russian aircraft that dropped the missile. His ministry said in a statement that the planes had taken off from the Russian military air field in North Ossetia - a region on the border with Georgia.

Salome Zurabishvili, a former foreign minister who now heads an opposition party, suggested that the missile had been dropped by a Georgian aircraft in an incident staged by Merabishvili.

Relations between Russia and Georgia have been strained ever since Saakashvili was elected president in early 2004 and made clear his intentions to move the former Soviet republic closer to the West.

Both sides on Tuesday accused the other of obstructing efforts to resolve the situation in South Ossetia.

"It's a test for Georgia and the international community to check how strong our reaction would be before planning serious moves to thwart the peace process," Deputy Foreign Minister Nika Vashakidze said. "Our response must be very firm."

"The Georgian side has done it in order to blame it on Russia," he said. "Russia is the main guarantor of stability in our region, and it doesn't want to incite tensions."

Russia's Foreign Ministry called the accusations a typical action used by Georgia before to prevent a peaceful solution in South Ossetia. The ministry also pointed to Georgia's past claims of Russian military violations of its airspace - which Russia has denied.

Earlier this year, Georgia said Russian helicopters fired on its territory in the Kodori Gorge, a volatile area on the fringes of breakaway Abkhazia. A subsequent report by the U.N. observer mission in Georgia last month said it was not clear who fired at the Georgian territory.