Kosovo resolution unacceptable to Serbia will not pass 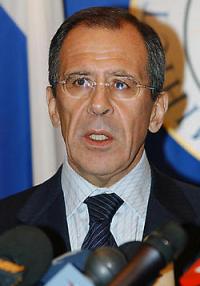 Kosovo resolution unacceptable to Serbia will not pass

Any resolution on Kosovo that is unacceptable to Serbia will not pass in the U.N. Security Council, Russian Foreign Minister said Monday.

"Any solution is possible on the basis of agreement by both sides involved. Any other decision cannot make it through the Security Council," Sergey Lavrov was quoted by the RIA-Novosti news agency as saying in Bishkek, Kyrgyzstan.

Lavrov did not specifically say that Russia would use its Security Council veto, but the his statement was the strongest indication yet that Russia would shoot down any resolution calling for Kosovo's independence from Serbia.

Kosovo, while officially a province of Serbia, has been administered by the U.N. and NATO since a 78-day NATO-led air war halted a Serb crackdown on ethnic Albanian separatists in 1999.

The United States and European members of the Security Council have drafted a resolution that would give Kosovo's majority ethnic Albanians and minority Serbs four months to reach an agreement on the status of the Serbian province. If there is no agreement, Kosovo would be granted independence under international supervision and eventually full independence.

On Sunday, U.S. Assistant Secretary of State Daniel Fried called for Russian cooperation on the issue but said that U.S. President George W. Bush has "made very clear that Kosovo's independence is going to be the result" of the process.