Putin to be seeking presidency again? 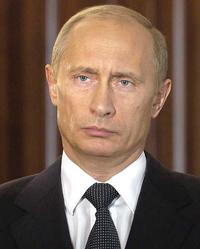 Putin to be seeking presidency again?

Is Vladimir Putin really going to give up Russian Presidency next year as it is dictated by the Russian constitution?

Many Russians expect Putin to run the country from the sidelines once he steps down after his second consecutive term - and there is a growing view that he'll return to the presidency after a period of rule by a handpicked loyalist.

Fyodor Lukyanov, editor of Russian in Global Affairs magazine, told The Associated Press in an interview this week that it's difficult to think of Putin in any role other than as Russia's leader.

"He will stay in politics as a very powerful person" even after he leaves office following the March 2008 election, said Lukyanov. The analyst added Putin would "quite likely" remain the most powerful in Russia.

Andrew Kuchins, director of the Russian and Eurasian program at the Center for Strategic and International Studies in Washington, agreed that Putin will likely try to step down without relinquishing most, or any, of his power.

At age 54, Putin shows no signs of tiring, and he is so popular - with approval ratings above 70 percent - that he would likely have no trouble changing the constitution to allow him to run for a third consecutive term. But he has repeatedly said he would oppose this.

Such a blatant power play would only seem to validate Western criticism of Putin as a foe of democracy and political pluralism. Worse, perhaps, it could reduce Putin's role on the world stage to that of strongman or aspiring president-for-life, rather than the elected leader of one of the world's largest economies.

He is widely expected to name his successor, and then throw the weight of the Kremlin-controlled media behind that candidate. After leaving office, experts expect him to become the leader of some new or formerly relatively insignificant political or government body - Russia's National Security Council, say - that suddenly will be transformed into a main center of power.

Such a post would only be temporary, many believe. Putin has not ruled out running for the presidency after the term of his successor ends in 2012, and there is nothing that prevents him serving a third and fourth nonconsecutive term.

"There is still a lot of time," Putin told reporters at a Group of Eight summit in Germany, when asked whether he would run in 2012. "Theoretically it's possible. The constitution does not forbid it."

His chance to return to the presidency could come sooner if his replacement retired for reasons of health or to spend more time with family, or if there were a change in the constitution that triggered earlier elections.

Currently, Putin's two first deputy prime ministers - the stern KGB veteran Sergei Ivanov and the boyish lawyer Dmitry Medvedev - are featured on state-run television every night, and appear to be the chief contenders for the role of Putin's replacement.

But if Putin's successor is only meant to be temporary, it seems likely that some more obscure figure will emerge late in the campaign season.

One wayor theother,analysts say, Putin will probably cede formal power at least temporarily. That, Kuchins and others point out, entails considerable risk.

Kuchins noted that when Boris Yeltsin named Putin acting president and his political heir in 1999, many of those around Yeltsin, including the billionaire Boris Berezovsky, "thought Putin would be their puppet."

If that's what Berezovsky believed, it was a grave miscalculation. After his election in 2000, Putin had a falling out with Berezovsky and stripped him of control of a top television channel. The tycoon fled to Britain, but the Kremlin has pressed for his extradition, to face charges related to alleged economic crimes.

The lesson is that transferring power can be risky. "The less risky thing for Putin to do is just stay on," Kuchins said. "The more risky thing is to try to create a new precedent in Russian history."

Several possible roles have been suggested for Putin. He might, some say, lead the country as the head of the United Russia, the pro-Putin party that dominates the lower house of parliament. Or he might become the chief of Gazprom, the state-owned natural gas monopoly - already regarded as a state-within-a-state - or some combination of Russia's largest state-owned industries.

Some have suggested that Putin could be named leader of the Commonwealth of Independent States, or CIS, a group of former Soviet nations known mostly for its squabbling. The thinking goes that he would weld a revived Russian empire out of pieces of the current CIS, including Russia, multiplying Moscow's economic and political stature.

Each of these scenarios has its problems.

Gazprom? Unlikely, analysts say. Too big a demotion. Prime minister in a parliamentary democracy? Russia prefers strong leadership under a single ruler. Head of the CIS? "The CIS is impossible to make functional," Lukyanov said.

"It's hard to buy any of them," Kuchins agreed. "Because de facto, now, those positions either don't exist, or they don't hold that much authority."

Experts say forecasting Putin's next move is difficult because of the nature of politics here, which has changed less since the Soviet era than might be expected.

The picture is murky in part due to the Kremlin's historic penchant for secrecy. It is, as it was in Soviet times, a political black box: a place where most major decisions are made privately with the advice of a select group whose views on issues are often guessed at but not publicly known.

"Kremlinology," the reading of subtle signs and signals based on such esoterica as who gets more air time on state-run television channels, is still practiced here, not just by the foreign press but by business executives, state officials, academics - nearly everyone interested in politics.

Reading the Kremlin's intentions is also complicated by the existence of factions surrounding Putin, some thought to be clamoring for a change in the constitution to permit him to run for a third term, some urging him to step aside, if only temporarily.

"I would not be surprised if they themselves don't know yet exactly how this power shift will be conducted," Lukyanov said.

Kuchins agreed. "I wouldn't be surprised if Mr. Putin hasn't really decided what to do himself."