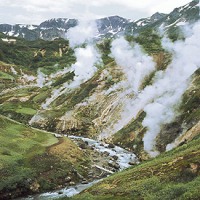 One of the most noted natural wonders of Russia, theValley of Geysers, is in danger for a severe landslide has hit it, Natural Resources Ministry said Monday.

The valley, on the Far Eastern Kamchatka Peninsula famed for its volcanoes, contains about 90 geysers and an array of thermal pools.

Sunday's landslide buried about two-thirds of the valley, the RIA-Novosti news agency cited local officials as saying. Tourists and park personnel were evacuated, but no injuries were reported.

The extent of the damage to the valley's geysers was not immediately known, but experts feared many of them were obliterated.

"The consequences of such a natural catastrophe are irreversible," said Oleg Mitvol, the deputy head of Russia's environmental watchdog agency Rosprirodnadzor.