A Moscow court on Thursday ordered to arrest a man involved in a frustrated terror plot planned for Victory Day involving an explosives-laden car. 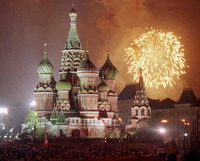 Earlier, Russian news agencies quoted officials with the Federal Security Service as saying that law enforcement agents had discovered an explosives-laden passenger car near a residential building in a Moscow region on Tuesday and only finished defusing it on Thursday.

"Demolition experts used a robot to retrieve bomb components from a PC base unit, including a foreign-made radio set meant to set off the bomb, a grenade, a fuse and electric detonators, as well as a submachine gun with two cartridge clips," Interfax quoted the FSB as saying.

"A search of the back seat revealed a bomb containing 7 kilograms (15 pounds) of plastic explosives and metal ball bearings, computer chips and additional charges," Interfax said.

An FSB duty officer confirmed the news reports, but refused to give any further details.

News agencies quoted the FSB as saying that several people from the North Caucasus region had been detained in connection with the investigation.

RIA-Novosti quoted a defense lawyer for Batukayev as saying that the court order for his client's arrest was illegal, and that he would challenge the order.

Russian security forces routinely go on higher alert during Victory Day, which marks the World War II victory over Nazi Germany. During celebrations in 2004, a bomb exploded in a stadium in the capital of Chechnya, killing Chechen President Akhmed Kadyrov.