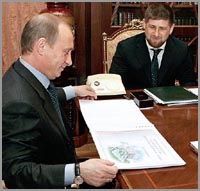 Human rights groups allege that security forces under Kadyrov's control abduct and torture civilians suspected of ties to Chechnya's separatist rebels. Some observers suggest he was tied to last year's murder of Anna Politkovskaya, a journalist who had reported extensively on Chechnya's wars and sufferings. Kadyrov has denied any involvement.

Kadyrov, however, is credited with a reconstruction boom that he administered as the region's prime minister, under which the capital, Grozny, is being transformed from a moonscape of rubble and shattered buildings.

The reconstruction program has been at the heart of a Kremlin strategy to crush rebels, but critics say the alleged abuses by his security forces and by Russian and Chechen police and soldiers severely undermine attempts to bring order to Chechnya.

Kadyrov, 30, is the son of Chechnya's first pro-Moscow president, Akhmad Kadyrov, who was assassinated in 2004. The elder Kadyrov became president in 2003 in a Kremlin-conducted aimed at undermining rebels by creating the image of Chechens being allowed a high degree of self-determination.

Alkhanov also was elected, but changes in Russian law called for all regional leaders to be appointed.

Two wars over the past dozen years between Russian forces and separatist rebels who increasingly voiced militant Islamic ideology left much of the republic in ruins and its people gripped by fear and resentment. Major offensives died down early this decade, but small clashes continue and rebels attack Russian forces with booby-traps and remote-detonated explosives.

Council of Europe human rights commissioner Thomas Hammarberg, who attended the conference, told reporters Friday that Chechnya continues to be plagued by allegations of torture and by officials' failure to respond to families seeking information about missing relatives.

Hammarberg declined to comment when asked for his opinion on Kadyrov's becoming president and he did not point to Kadyrov's forces as responsible for abuses.

Of the detainees who he interviewed in Chechnya that complained of torture, "several of them pointed at the activities of the federal police," he said in Moscow.

Hammarberg recommended that Chechnya set up a "truth commission" similar to those established in Latin American countries to try to bring those responsible for abuses to light.

Analysts say Putin has entrusted Kadyrov with power in part because he is seen as the only person who can keep large numbers of former rebels under control. Many former rebels now serve in the police and security forces.

But his growing clout is also seen as a risk for the Kremlin, particularly after Putin steps down at the end of his second term next year, because some see his loyalty to Russia as being closely tied to his relationship with Putin.

Kadyrov has repeatedly praised Putin including calling for him to stay on as president despite the two-term limit but has harshly criticized the Russian government and the state-run oil company OAO Rosneft, calling for greater economic freedom for Chechnya and for a larger share of its oil revenues.

With the power to foment new chaos in fragile Chechnya and create serious problems for Russia, analysts say he could take a more demanding stance if his relations with the Kremlin become clouded.

The first war between rebels and Russian forces began in December 1994 and ended 20-months later with a humiliating Russian withdrawal after rebels fought them to standstill.

Fighting resumed in 1999 after Chechen insurgents invaded neighboring Dagestan, apparently aiming to set up an Islamic caliphate, and after some 300 people were killed in apartment bombings that Russian authorities blamed on the rebels, reports AP.

Chechen rebels have been involved in most of the terrorist attacks that have plagued Russia for more than a decade.