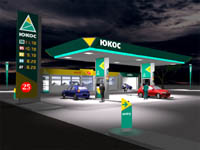 The court had declared Yukos bankrupt on Aug. 1, upholding an earlier vote by the company's creditors - a group dominated by the tax authorities and the state oil company OAO Rosneft.

Court officials could not immediately be contacted to confirm the decision, reports AP.

The bankruptcy is seen as the final act in a politically charged campaign that has led to the company's dismantling against massive back tax claims and the imprisonment of its founder, Mikhail Khodorkovsky.

Kremlin critics call the case a drive to recapture influence in the oil sector by transferring Yukos assets to state companies, and a simultaneous crackdown on Khodorkovsky's perceived political aspirations.

Rosneft and state gas monopoly OAO Gazprom are expected to acquire the remaining Yukos assets as they are liquidated to pay off creditors. Rosneft acquired the biggest Yukos production unit following its auction in December 2004 against a part of the company's tax bill.