Nobel laureate and former Soviet dissident Aleksander Solzhenitsyn in a newspaper interview accused the United States and NATO of seeking to encircle Russia, and praised President Vladimir Putin for working to restore a strong state. 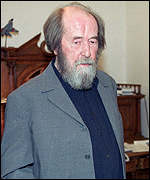 In a rare interview, the reclusive 87-year-old author, who rose to prominence for his accounts of Soviet dictator Josef Stalin's repression and labor camps, told the liberal weekly Moscow News that NATO's ultimate aim was the loss of Russia's sovereignty, according to a full text of the interview posted on its Web site edition Thursday.

"Though it is clear that present-day Russia poses no threat to it, NATO is methodically and persistently building up its military machine into the east of Europe and surrounding Russia from the south," Solzhenitsyn was quoted as saying.

"This involves open material and ideological support for 'color revolutions' and the paraxodical forcing of North Atlantic interests on Central Asia," he reportedly said, adding that there was "little substantial difference" between the actions of the U.S. and NATO.

"All this leaves no doubt that they are preparing to completely encircle Russia and deprive it of its sovereignty," Solzhenitsyn was quoted as saying.

Russia was furious at what it saw as Western encroachment on its home turf after a series of peaceful revolutions brought opposition leaders to power in the former Soviet republics Georgia, Ukraine and Kyrgyzstan.

Solzhenitsyn lashed out at the pro-Western government in Ukraine for its drive to obtain NATO membership, and said Russia would "never betray in any way the multimillion Russian population in Ukraine and renounce our unity with it," according to report.

The author, known for his conservative Slavic views, accused former reformist Soviet leader Mikhail Gorbachev of capitulating to the West, and Russia's first post-Communist president, Boris Yeltsin, of pursuing the same policy as well as presiding over the massive theft of state resources and a descent into chaos.

But he said in the interview with Moscow News that Putin, a former KGB career intelligence officer who was elected in 2000, was making efforts to restore Russia's shattered statehood.

"Foreign policy, considering our current situation and possibilities, is being conducted sensibly and ever more forward-thinking," Solzhenitsyn said.

"But owing to the heavy burden left by his predecessors, an awful, awful lot in Russia has yet to be lifted up from decline. The overall state of people's lives remains hard and chaotic," he said.

Solzhenitsyn spent a decade in a labor camp and documented life in the camps in his best-known works, "One Day in the Life of Ivan Denisovich" and the "Gulag Archipelago" trilogy.

He won the Nobel Prize in literature in 1970 and was expelled from the Soviet Union four years later. He lived in the U.S. state of Vermont until his 1994 return to Russia, three years after the collapse of the Soviet Union.

His profile as a moral arbiter and a literary star have declined since he returned and began criticizing the corruption and poverty of post-Soviet Russia. He has kept a lower profile in recent years, giving few interviews and issuing few public statements, reports AP.