Russia on Tuesday launched a spy satellite for Israel that the Israelis say will be used to spy on Iran's nuclear program, as Iran's leader persisted with his calls for the Jewish state's destruction. 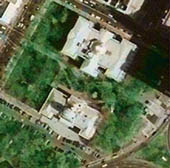 A Russian official said the satellite reached orbit, but experts said it would be some time before it could be determined if the satellite was operational.

Defense Minister Shaul Mofaz, meanwhile, said Iran has already funneled $10 million (Ђ8 million) to Palestinian militant groups since the start of the year, according to a newspaper report Tuesday.

Israel has for years regarded Iran as the primary threat to its survival, disputing Tehran's claims that its nuclear program is peaceful. Iranian President Mahmoud Ahmadinejad has made this threat more tangible by repeatedly questioning Israel's right to exist, most recently on Monday, when he said Israel was a "fake regime" that "cannot logically continue to live."

The Eros B satellite is designed to spot images on the ground as small as 70 centimeters (27.5 inches), a defense official said. That level of resolution would allow Israel to gather information on Iran's nuclear program and its long-range missiles, which are capable of striking Israel, he said.

The launch of the Israeli Eros B satellite took place from a mobile launch-pad at the Svobodny cosmodrome in Siberia at 8.47 p.m Moscow time (1647 GMT), said Alexei Kuznetsov, a spokesman for the military space forces.

"The Israeli satellite reached its target orbit and has been transferred to the client's control," Kuznetsov was quoted as saying by ITAR-Tass.

"The most important thing in a satellite is its ability to photograph and its resolution," the Israeli official said, speaking on condition of anonymity because of the sensitive subject matter. "This satellite has very high resolution, and (state-run) Israel Aircraft Industries has a great ability to process information that is relayed."

If the launch is successful, it will take seven to 10 days to see whether the images that are transmitted are sharp and clear, he said, reports AP.