Russian Foreign Minister Sergey Lavrov said Friday that a deal with Iran on its uranium enrichment program was still possible before next week's meeting of the United Nations nuclear watchdog, news reports said. 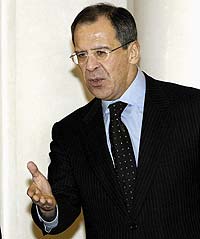 "There always is an opportunity to reach an agreement," Lavrov said in response to a question about whether it was still possible to negotiate an agreement with Iran preventing its referral to the U.N. Security Council at Monday's meeting of the International Atomic Energy Agency, the Interfax, ITAR-Tass and RIA Novosti news agencies reported.

Lavrov's statement came even as Iran's talks with the European Union broke up in Vienna Friday without any agreement.

Lavrov said that a deal would only be possible if Iran resumes a moratorium on uranium enrichment at home and allows IAEA inspections to continue. He said his deputy, Sergei Kislyak, was in Vienna for more talks on the Iranian nuclear issue.

Russia has urged Iran to freeze its domestic uranium enrichment program as a condition for Moscow's offer to create a joint venture to enrich uranium for Tehran on Russian territory, but Tehran has rejected the demand.

Interfax quoted a Russian diplomat, who spoke on condition of anonymity because of the talks' sensitivity, as saying that talks with the Iranian delegation in Moscow this week had produced "elements" that could "be a foundation for a compromise" that would keep the Iranian nuclear dossier within the IAEA and prevent its referral to the U.N. Security Council.

However, a Russian nuclear agency official, who spoke on condition of anonymity because he was not authorized to speak to media, said that the Moscow talks remained snagged over Iran's refusal to freeze enrichment at home.

The Iranian negotiator, Ali Larijani, insisted Thursday that bilateral talks should continue on the Russian offer, and warned that Iran's referral to the U.N. Security Council as the United States has demanded would kill Moscow's initiative.

In Washington, the U.S. State Department said Thursday Iran had only itself to blame for referral of its activities to the U.N. Security Council.

The Vienna-based IAEA board of governors on Monday could start a process leading to punishment by the U.N. Security Council, which has the authority to impose sanctions on Iran.

Iran insists its nuclear program is only to generate power, but many in the West fear Iran is aiming to develop atomic weapons.

Moscow's offer to have Iran's uranium enrichment program transferred to Russia has been backed by the United States and the EU as a way to provide more assurances that Tehran's atomic program could not be used to build weapons.

The Council for Foreign and Defense Policy, a leading Russian global policy think tank, said in its latest report that Iran would likely obtain nuclear weapons in no more than five years, the Interfax news agency reported. The council warned that this would encourage such nations as Saudi Arabia and Egypt to also seek atomic weapons, reports the AP.