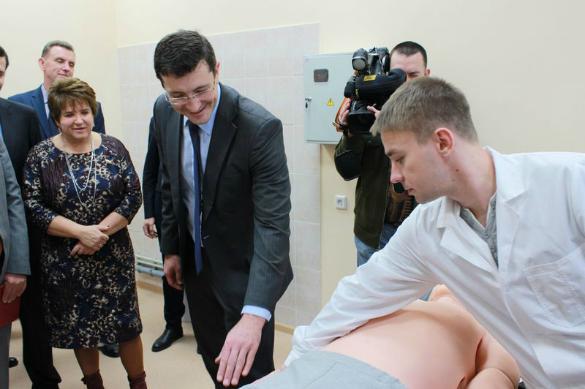 The developments of the center include: methods of early diagnosis of cancerous diseases on the basis of blood analysis ("Rose" project) and medical robotic rehabilitation complexes for patients with neurological disorders - an exoskeleton complex controlled by muscle and brain signals - for patients with musculoskeletal system damage, a rehabilitation system for post-stroke patients based on the brain-machine interface, and the muscle activity restoring system "Cybertrainer."

Another innovative project - "Cyber Heart" - allows to conduct diagnostics procedures at the polyclinic level even before hospitalisation. It includes systems for graphical support for the analysis of data in cardiology, automatic development of techniques of possible treatment of specific patients and the measurement of ECG tracing to subsequently send results out over wireless network. The "Cyber Heart" will simplify the work with those in need of remote assessment of their cardiovascular system with the help of individual monitoring devices. The data will be transmitted to the doctor through a special phone application.

The main goal of the center is to create a zone for the growth of medical instrument making and high biomedical technologies. The center was built within the framework of the federal program for the development of the pharmaceutical and medical industry until 2020. Rector of the Nizhny Novgorod State University named after N.I. Lobachevsky, Yevgeny Chuprunov said that the university received nearly 1.5 billion rubles for the project.

"Not every big university, not even in every city, and not even in Moscow and St. Petersburg, can boast of such successes," Lyubov Glebova, deputy chief of the Senate Committee on Science, Education and Culture said at the opening ceremony.

In the future, the region plans to establish a university clinic in the field of experimental and nuclear medicine. The clinic, Nizhny Novgorod region Governor Gleb Nikitin noted, "will give an opportunity to move forward in the treatment of cancer and early diagnosis of such diseases, which is also very important, because an effective diagnosis can greatly improve the effectiveness of treatment and save many human lives." The clinic may start working already in 2019.

The head of the region believes that it is important to take into account opening perspectives in planning the development of the regional economy. "The Nizhny Novgorod region has every reason to specialise in high technologies and innovations and become a truly leading industrial innovation center in the country," he said.

The Minister of Industry, Trade and Entrepreneurship of the Nizhny Novgorod Region, Maxim Cherkasov, shares the view of the governor. "The Nizhny Novgorod region takes a leading position in Russia in terms of the share of innovative products. Last year, the index reached 16.5%, which was twice as much as the average Russian level of 8.5%," he said.

Following the results of 2016, the Nizhny Novgorod region entered the top five of Russian regions in terms of the share of innovative products in the total volume of industrial production. According to Rosstat, from January to September 2017, the industrial production growth in the region reached 5.5%, which was almost twice as much as the average level in the country.