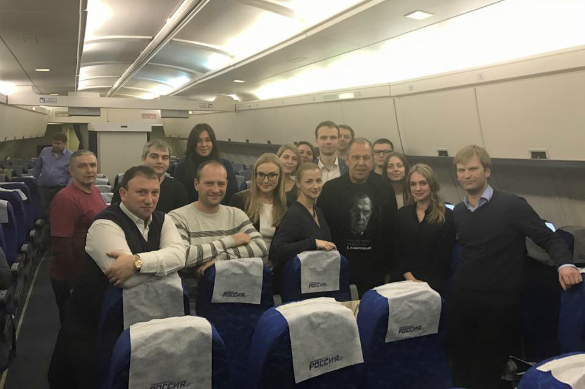 "Sergei Lavrov celebrates his birthday in an excellent company and at a high ebb," official representative for the Russian Foreign Ministry Maria Zakharova wrote on Facebook as a caption for the photo of the minister in the company of Russian journalists.

Sergei Lavrov remains in good spirits. On the photo, he can be seen wearing a black T-shirt with his own portrait on it. "He who doesn't want to talk to Lavrov will talk to Shoigu," the slogan on the T-shirt says (Sergei Shoigu is Russia's Defense Minister - ed).

In Tokyo, Sergei Lavrov took part in a meeting of foreign and defense ministers of Russia and Japan in "two plus two" format. The talks were devoted to the preparation of Shinzo Abe's visit to Russia, which is to take place in late April. This was the first meeting after the three-year-break. The next meeting in the same format will be held in Russia.