Turkish President Recep Tayyip Erdogan announced that Turkey was ready to implement the Turkish Stream gas pipeline construction project with Russia. In addition, Russia and Turkey will cooperate for the construction of a nuclear power plant in Turkey, RBC reports. 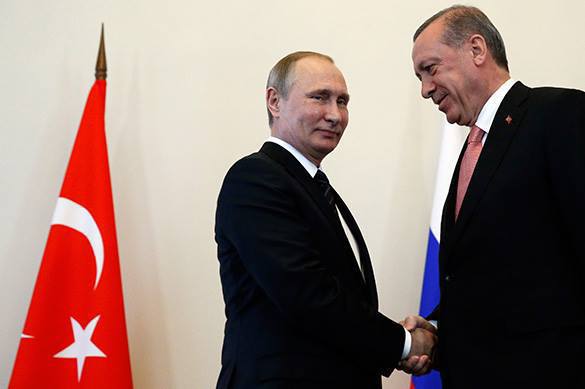 During the press conference after a meeting with Vladimir Putin in St. Petersburg, Turkish President Erdogan said that Turkey was interested in the resumption of the Turkish Stream project to ensure, inter alia, stable supplies of natural gas to Europe.

In turn, Vladimir Putin complimented the Turkish authorities: "As for the Turkish Stream, our colleagues in Ankara continued working on it even during the crisis of relations," Putin said.

President Putin noted that the work on energy projects would require "political decisions." "The Turkish side has already made a number of decisions, pertaining to the nuclear power plant and the Turkish Stream," Putin said.

The head of Gazprom, Alexey Miller, stated that Russia was already in talks with Turkey on the subject of the Turkish Stream project. At the same time, Russian Minister for Energy, Alexander Novak, said that for the time being, it goes about the construction of a gas pipeline to Turkish consumers only. The work on the second line for European consumers will be resumed only after the EU provides adequate guarantees.

Putin also said that Russia would resume charter flights to Turkey in the nearest future. "This is purely a technical issue," Putin said.