The Russian Defense Ministry has uploaded the video of a training launch of a cruise missile from tactical missile complex Iskander-M. The video appeared on the official website of the department on April 15. 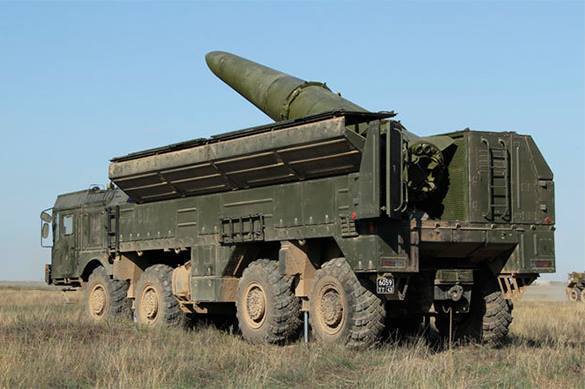 "The missile, made with the use of the radar signature reduction technology, was not detected by means of electronic warfare of the imaginary enemy and destroyed the target successfully," the press service of the department said as a result of the launch conducted at Kapustin Yar range ground in the Astrakhan region.

"The missile was flying at an altitude of 40-50 kilometers while maneuvering with 20-fold G force in some parts of the flight," the report added.

The missile struck the target of a conditional enemy at a distance of about 200 km.

In late 2015, Russia's renowned Iskander-M missile system was outfitted with a new aeroballistic missile. The operational-tactical missile system 9K720 Iskander-M was developed during the 1990s and adopted for service in 2006. The system replaces outdated complexes 9K79 Tochka (9K79-1 Tochka-U). The range of Iskander missiles reaches 500 kilometers.

In the West, Iskander-M is known to be one of the most dangerous weapons of the Russian arsenal. The complex is able to overcome the most advanced air defense systems, including the US missile defense system. It takes 16 minutes to launch a missile from the complex, but the time can be cut to four minutes in case of operational readiness. A second missile can be launched in less than 50 seconds.