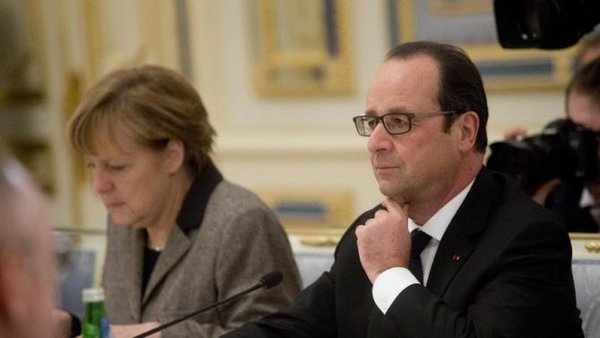 "Negotiations are being conducted face to face, without the participation of members of delegations or any experts," Peskov said.

Angela Merkel and Francois Hollande have previously paid a visit to Kiev, where they discussed the situation in the south-east of Ukraine with President Petro Poroshenko. Following the meeting with the Ukrainian President, Merkel and Hollande said that they were going to Moscow to continue the negotiations with Russian President Putin.

Prior to her departure to Moscow, German Chancellor Merkel said that she was not certain whether today's talks with French President Hollande and Russian President Putin in Moscow would lead to a ceasefire agreement in Ukraine. "It is totally open as to whether we will, with these talks, succeed in achieving a ceasefire, we don't know if that will be achieved today, if, perhaps further talks will be needed," Merkel said at a news conference.

"We don't know if we will have long or short talks in Moscow or if these will be the last talks. We can only do what we can to resolve this conflict and especially to end the bloodshed," she said.

UPDATE: Merkel, Hollande and Putin interrupted the meeting in the Kremlin for a protocol photoshoot and supper. The leaders of Germany, France and Russia did not communicate with reporters. Details of their meeting that lasted for about five hours remain unknown. According to the Kremlin, the text of a possible document is in progress. The talks were constructive and meaningful, Putin's press secretary Dmitry Peskov said. The results of the talks will be summed up on February 7, Peskov added.