Putin to attend three international summits in one week

Russian President Vladimir Putin is having a very busy work schedule this week. He is attending several large-scale international summits - APEC, G20 and BRICS summits. During the summits, Russia intends to draw the attention of the respectable world forum to issues of attracting investment, trade restrictions, the need for structural reforms and economic growth. The topics of the Ukrainian crisis and the struggle against the Islamic State are likely to be raised during the above-mentioned summits as well. 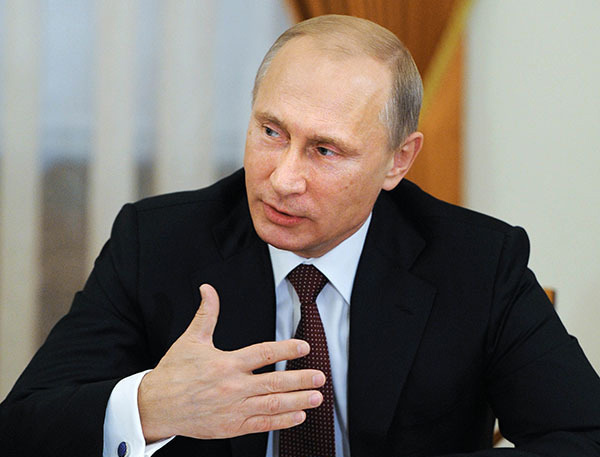 On November 10-11, Putin is taking part in the 22nd meeting of the heads of states and governments of the Asia-Pacific Economic Cooperation (APEC), where he has already delivered a speech, in which he promised not to restrict capital movement. According to Putin, the Russian authorities are capable of controlling the situation avoiding additional measures, RIA Novosti reports.

"It is important that our basic indicators of gold and currency reserves, as well as foreign balance, remain on a good level. This enables us to control the situation without resorting to additional extraordinary measures. I'd like to repeat that we are not going to restrict capital movement," Putin said.

The Russian leader also commented on the speedy decline of the rate of the Russian ruble against the dollar and the euro. Putin assured that "speculative fluctuations" on the Russian market during the recent week would soon end, Interfax reports. "The events that we see today in Russia are absolutely not connected with fundamental economic reasons and factors," he said.

After Putin's remarks about the ruble, dollar and euro rates dropped against the Russian currency by one ruble in ten minutes and then continued decline.

Within the scope of the APEC summit, Putin will also take part in the traditional meeting of leaders with members of the APEC Business Advisory Council. "After the general plenary session, Vladimir Putin will attend the meeting of one of the groups, which also includes the Sultan of Brunei and presidents of Mexico and the Philippines, as well as leaders of several companies of the APR countries," presidential aide Yury Ushakov said.

The agenda of the summit in Beijing is focused on the maintenance of the positive dynamics of Asia-Pacific Rim countries against the background of instability in world economy. On November 10, it is expected that the leaders will discuss issues of deepening regional economic integration, whereas on November 11, the participants will pay attention to issues of strengthening comprehensive regional interconnectivity and infrastructure improvement.

During the APEC summit, said Ushakov, Russia intends to draw attention to the problems of attracting investment in large infrastructure projects of the countries, including the modernization of the Baikal-Amur Mainline and Trans-Siberian Railway.

"Following the meeting of heads of state and governments, a declaration of APEC leaders will be adopted. The declaration is to reflect coordinated approaches to the development of integration and interdependence, innovation and development in the region. Addenda to the Beijing Declaration, namely the APEC Road Map for assistance and movement to the Asia-Pacific free trade zone, are also expected to be adopted," said the presidential aide.

It is planned that at APEC summit, the Russian president will meet with Australian Prime Minister Tony Abbott, said Ushakov.

"The Australians submitted an official inquiry for the meeting in the course of the APEC summit. We gave consent for a brief meeting and currently coordinate the timing," Ushakov said.

The meeting between Putin and Abbott will not last long, he specified, and will take place on November 11.

In the evening of November 10, following the completion of the official program of the APEC summit, Putin will conduct two meetings with the head of the IMF Christine Lagarde and Prime Minister of Japan. On this day, the president will also hold two bilateral meetings. "Putin is scheduled to meet with the new president of Indonesia and the leader of Malaysia," said Ushakov.

At the end of the week, on November 15-16, Brisbane will host the G20 summit. During the event, the president of the Russian Federation will conduct several meetings with leaders of other countries.

In particular, Putin's press secretary Dmitry Peskov did not exclude a possibility of a meeting between Vladimir Putin and US President Barack Obama during the Summit of the Group of Twenty.

Earlier, Peskov told Interfax that the Russian and US presidents were not planning separate bilateral meetings either at the APEC summit in Beijing or the G20 summit in Brisbane, but the possibility of their informal communication was not excluded.

At the G20 summit, issues of the Ukrainian crisis and the struggle against the Islamic State are likely to be discussed. Yet, the specific choice of topics for the summit in Brisbane will depend on the participants of the summit.

"The prime objective of the BRICS summit is to coordinate positions on key issues on the agenda of the group of Twenty. The list of key issues includes the project of the new BRICS Development Bank, as well as the pool of contingent foreign exchange reserves worth $200 billion, as discussed at the previous summit," said Ushakov.

According to the official, special attention at the meeting of the leaders of Brazil, Russia, India, China and South Africa will be paid to reforming international financial institutions, particularly the redistribution of quotas in the IMF.

Ushakov stressed out that Russia planned to pay special attention to the subject of trade expansion, increasing technological and industrial cooperation.

The BRICS countries altogether produce almost 30% of world GDP ($15.4 trillion) and represent the largest market in the world, as the countries are home to some 3 billion people (40% of the world population). The gold reserves of the countries total nearly 5 trillion dollars, and the volume of trade within the BRICS has doubled over the last five years from $170 billion to $300 billion.

For Russia, the forthcoming BRICS summit is of particular importance, as Russia is chairing the organization afterwards.

"The next BRICS summit will be held on July 8-9, 2015 in Ufa, concurrently with the summit of the Shanghai Cooperation Organization," he said.