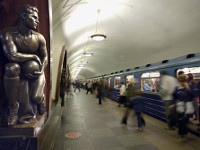 Moscow Mayor Sergei Sobyanin, opening the government meeting of the capital, announced the replacement of the head of the Moscow Metro. The new chief of the Moscow underground system is Dmitry Pegov.

"The head of the Moscow Metro Ivan Besedin is dismissed from his post," Sobyanin said. Dmitry Pegov previously served as the general director of the department for high-speed traffic, a branch of JSC Russian Railways.

As a result of the accident in the Moscow metro on July 15, three cars of the train derailed. Twenty-two people were killed and more than 150 were injured in the accident. As of July 22, four of the injured remain in critical condition at Moscow hospitals. Twenty-nine patients, who suffered injuries of various degree in the crash of the metro train, were discharged from hospitals last week.

Investigators believe that in the tunnel between the stations of "Park Pobedy" and "Slavyansky Boulevard," the works to mount the crossing piece were conducted improperly. The switch box was mounted with the help of a 3-mm wire that broke.

Four suspects were detained within the scope of the investigation of the criminal case, all of them are railway tracks engineers.