Russia's Medvedev Does His Best To Improve Ties with USA 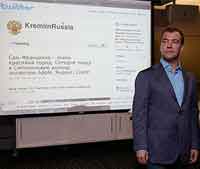 Russia's Medvedev Does His Best To Improve Ties with USA

On the second day of his American visit, President Medvedev spent the morning meeting with some of Silicon Valley's top executives from Cisco, Twitter, Google, and Apple. Mr. Medvedev's visit signals his strong interest in promoting U.S.-style technology and innovation in Russia. In a major speech at Stanford University, Mr. Medvedev talked about his plans to build a Russian version of Silicon Valley in Skolkova, outside of Moscow. His goal is to attract talent and investment capital from Silicon Valley. Speaking through a translator, Medvedev extended an open invitation to potential investors and said his government would do what it could to support them, Voice of America reports.

"Greetings to everyone, I'm at Twitter and this is my first message" the Russian leader tweeted from Twitter headquarters in San Francisco. Medvedev also posted a photograph of the "view outside my hotel window" in San Francisco and another of himself greeting Twitter employees from the new @KremlinRussia account.

But at Cisco Systems headquarters in San Jose, Medvedev's visit was serious business. He joined Cisco CEO John Chambers for Cisco's announcement that it plans to invest $1 billion over several years in company projects aimed at developing innovation and entrepreneurship in Russia, CNN informs.