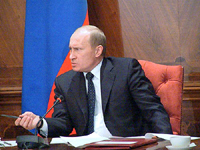 Russian Foreign ministry said Wednesday that the country had implemented its moratorium on participating in a key European arms control treaty but was ready for talks to revive it.

The treaty placed limits on the number of conventional weapons that could be deployed west of the Ural Mountains, the edge of European Russia. Putin called for the suspension because NATO countries have not ratified a revised version of the treaty, which originally was signed in 1990.

There were no immediate indications that Russia was redeploying weapons after the suspension, but the Foreign Ministry said Russia has stopped exchanging information stipulated by the treaty and had stopped receiving foreign inspectors.

Russia "is prepared for continuing a results-oriented dialogue on the CFE during its suspension," a ministry statement said. "We hope that such dialogue will bring about the desired results if the other signatories to the treaty display political realism and look for mutually acceptable solutions."

The original treaty was a key agreement of the late Cold War era and the 1999 revision was aimed at reflecting the shift in the military power balance after the collapse of the Soviet Union.

Putin's call for Russia's temporary withdrawal from the treaty coincided with mounting anger in the Kremlin over U.S. plans to build a missile defense system in Eastern Europe.