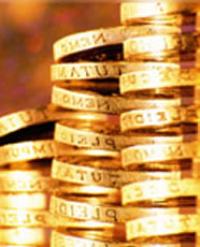 The suspect deals included a EUR280 million (US$377 million) bond sale to state pension funds this year, which has embarrassed Greece's governing conservatives, forced the labor minister to resign and drawn opposition calls for a parliamentary investigation.

The names of the suspects and the companies involved were not made public. A senior judicial official, who asked not to be named because the investigation is ongoing, said top officials in state pension funds, banks and brokerages were among those charged.

The charges followed two separate investigations into the investments of state pension funds between 1999 and 2007. Koliocostas found that the funds lost a total of more than EUR21 million (US$28 million) from their placements in bonds and stocks.

The probes were prompted by a EUR280 million (US$377 million) sale of structured bonds in February to state pension funds.

The bonds were underwritten by U.S. investment bank JP Morgan on behalf of the Greek government and sold to London-based hedge fund North Asset Management in February for 92.95 percent of their nominal value. They were then sold to Germany's HypoVereinsbank and Greek brokerage Acropolis Securities, before eventually being purchased by several state pension funds at inflated prices in the secondary market.

This month, JP Morgan and North Asset Management agreed to buy back the entire bond issue and make good the losses that the pension funds had suffered on their purchase.

Koliocostas charged 15 people over that deal.

Another 50 people were charged after a second investigation looked into investments by state investment funds between 1999 and 2005.

The case will now be handled by investigating magistrate Giorgos Lekkas, appointed last week to investigate February's deal. Lekkas will also examine whether additional charges should be brought against the 65 suspects or other individuals not yet implicated.