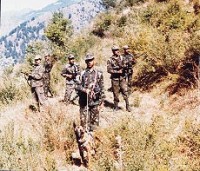 An intelligence official in North Waziristan said three missiles fired from across the border destroyed a training facility, killing 17 militants and wounding 10 others. He spoke on condition of anonymity as he was not authorized to speak to media.

But Pakistan army spokesman Maj. Gen. Waheed Arshad claimed that the explosions were caused when bombs militants were making at an isolated compound accidentally exploded.