A man allegedly shot and wounded four people including a police officer who later died and was holding a woman hostage at his central Japan home. 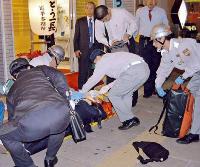 Hisato Obayashi, 50, was believed to have fired several shots in the afternoon and to be holding the unidentified female hostage as of late Thursday night at his home in the city of Nagakute in Aichi prefecture (state), said Aichi police official Satoru Okumura.

A man and woman believed to be Obayashi's son and daughter were apparently shot and taken to a hospital with injuries that are not life-threatening, Okumura said.

However, a second officer was shot in the collarbone and died in the hospital, Kojima said.

Kojima said it was not clear if the first police officer and the Obayashi's two children were shot by Obayashi. She did not speculate on who else might have fired shots.

Public broadcaster NHK reported that Obayashi had once been a gangster, and that the woman hostage was believed to be his wife.

Police officials said they did not know the hostage's identity.

Kyodo said Obayashi was demanding to be put in contact with his daughter. It was unclear if he was referring to the one who was allegedly shot.

The incident comes just a month after the mayor of Nagasaki was fatally shot in an attack by an organized crime chief, and a gangster attack that took place in the streets of a Tokyo suburb only a few days later.

The use of guns is still relatively alien to the Japanese public. Handguns are strictly banned, and only police officers and others professionals such as shooting instructors can own them. Hunting rifles are also strictly licensed and regulated.