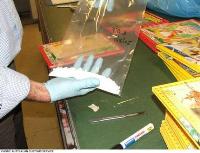 The statement, carried by the Saudi Press Agency, said Abu Bakr al-Anfal was found guilty of bringing heroin into the kingdom. He was executed in the capital Riyadh.

Saudi Arabia follows a strict interpretation of Islam under which people convicted of murder, drug trafficking, rape and armed robbery can be executed. Beheadings are carried out with a sword in a public square.

Tuesday's executions brought to 67 the number of people, including two women, beheaded in the kingdom this year. The kingdom beheaded 38 people last year and 83 people in 2005.