About 20 people who complained of respiratory problems after smelling chemical fumes at an industrial dry-cleaning facility were taken to hospitals. 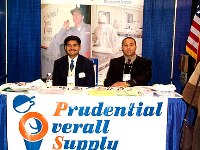 The cause for the symptoms was unclear. Workers told investigators that acid and industrial bleach had been mixed, potentially causing a gas cloud inside the facility, fire department inspector Adrian Abel said.

But a spokesman for the company, Prudential Overall Supply, said he had been told that maintenance workers used sulfuric acid alone to do routine flushing of the laundry equipment.

"For whatever reason this particular time there was a stronger odor than normal," said Jerry Martin, a Prudential vice president.

Hazardous materials teams found no hazardous levels of either sulfuric acid or chlorine gas in the building, Abel said. Chlorine gas is an irritant that poses an inhalation hazard.

Martin said the people taken to the hospital were expected to be released by Friday afternoon.