U.S. and German agencies are investigating a potential terror plot against U.S. military bases, buildings and citizens in Germany. 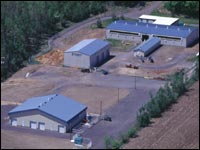 Authorities had no indication of an imminent attack within Germany or the United States, said FBI special agent Richard Kolko. "We remind the public to remain vigilant and report any suspicious activity to the appropriate law enforcement authorities," he said.

The plot was made public on April 20 when the U.S. Embassy in Berlin issued a warning to U.S. diplomatic and consular facilities in Germany to increase security and asking Americans there to increase their vigilance. Security outside U.S. bases in Germany also was stepped up.

A U.S. counterterrorism official, who also spoke on condition of anonymity, said the worry, then and now, is that U.S. military bases, American tourists and other U.S. interests in Germany could be attacked. Among other possibilities, the official said information gathered about the threat suggested that the plot could involve bombs or small arms. The threat information was not specific about the potential attack's time or location, the official said.

The official said counterterrorism authorities believed Islamic extremists were behind the planning, but the official had no reason to suspect al-Qaida specifically.

Gordon Johndroe, a spokesman for the White House's National Security Council, said, "The United States is working with German authorities, as we do with our allies around the world, to counter any potential terrorist activity."

The Homeland Security Department sought to make clear there was no known plot inside U.S. borders. "There is no credible intelligence to suggest an imminent threat to the homeland at this time," said spokesman Russ Knocke.

In Germany, the Interior Ministry said in a statement that federal prosecutors have opened an investigation, but no details could be provided.

Daniel Mattern, a spokesman for the U.S. Embassy in Berlin, said there had been no changes since it issued its April 20 warning for U.S. diplomatic and consular facilities.