Arizona man sentenced to year in prison for animal cruelty

An Arizona man was sentenced to a year in prison for slitting his dog's throat and binding its legs so tightly the bones were exposed. The case that was called one of the worst acts of animal cruelty in the United States by the Humane Society. 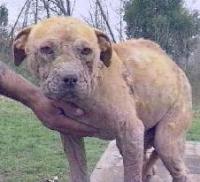 Arizona man sentenced to year in prison for animal cruelty

Eric Saenz, 20, pleaded guilty to a felony count of cruelty to animals. He was accused of binding his dog's legs with zip ties and leaving it to die in an abandoned mobile home without food or water last October.

The zip ties had dug into the flesh so badly that the dog's legs were bloodied and its bones exposed. The Maricopa County Sheriff's Office also reported the dog's throat had been slit.

"The facts of this case are egregious," she said. "This type of act shocks the conscience."

She told Saenz: "You not only left the dog, you actually tortured the dog and then left it to die."

Saenz also was sentenced to an additional 3 1/2 years for concurrent burglary charges. He was taken into custody immediately after the sentencing.