It added to the debate over the influence of pop culture on heinous crimes that one of the photographs in the Virginia Tech killer's "multimedia manifesto" may have been inspired by a bloody South Korean movie. 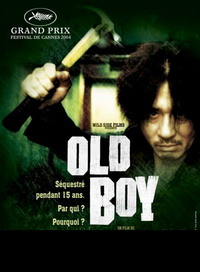 "Oldboy", from the respected director Chan-woo Park, is about a man mysteriously imprisoned for 15 years. After escaping, he goes on a rampage against his captor. In one stylized and plainly unrealistic scene, he dispatches more than a dozen henchmen with the aid of a hammer.

In the package of materials that Cho Seung-Hui sent to NBC News, one photo shows Cho brandishing a hammer in a pose similar to the movie's signature image, which was splashed across its promotional posters.

The photograph with the hammer stood out from the other 42 photos, which generally showed Cho posing with handguns in a military-style vest and backward baseball cap.

The second film in Park's "Vengeance Trilogy," "Oldboy" won the Grand Prix award at the 2004 Cannes Film Festival. It was hugely popular in South Korea, where more than 3 million people saw it.

The connection was spotted by Professor Paul Harris of Virginia Tech, who alerted authorities. The similarities have prompted speculation, especially in online forums, that Cho's massacre may have been partly inspired by "Oldboy."

There was no apparent link between Cho and "Oldboy" besides the lone photograph among the 28 video clips, 23-page written message and 43 self-portrait photos that he sent to NBC. Cho killed the 32 victims with a handgun and a pistol, and did not seem to reference the film in any of his notes or messages.

A screenplay written by Cho, however, did feature killings with a hammer.

Tartan Films, which distributed "Oldboy" in the U.S., said in a statement Thursday: "To be associated in any way with the tragic events that occurred at Virginia Tech is extremely disturbing and distressing. It is clear from news reports that the individual who perpetrated this heinous crime was deeply troubled. We believe that anyone would find it hard to explain his motives or actions."

Notorious killers are commonly linked to movies or music. The trench coats worn by the Columbine High School murderers, Eric Harris and Dylan Klebold, were seen by some as reflective of those worn in "The Matrix." Some also assigned blame to Goth rocker Marilyn Manson, who later criticized the media in his song "Target Audience (Narcissus Narcosis)."

The late rapper Tupac Shakur was claimed to have inspired a number of killings, including the murder of four students and wounding of ten others in Jonesboro, Arkansas, in 1998 by Mitchell Johnson.

One of the earlier examples of pop culture being connected to a mass homicide was the link between the Beatles and Charles Manson, who was captivated by the song "Helter Skelter."

Loren Coleman, author of "The Copycat Effect: How the Media and Popular Culture Trigger the Mayhem in Tomorrow's Headlines," says that he's gradually coming to see Cho as a "copycat of many things," especially Columbine. In one missive, Cho referred to Harris and Klebold as "martyrs."

"This in-depth analysis of his manifesto and this document, we may get some hints there, but this was a person that was terribly imbalanced," Coleman said. "To look for clues rationally in such an irrational document is really a fool's game."

Writing for the Huffington Post, filmmaker Bob Cesca dismissed Cho's "Oldboy" connection as "the most ridiculous yet," and noted many other popular culture references that feature images of a raised hammer.

"It seems like a cop-out, like an easy way out to explain away a tragedy like this," Cesca said Thursday. "Clearly I think the primary issue here is mental illness. It could be any number of things that maybe had a small part in this, but to create (a movie) as a trigger is missing the bigger picture."