A judge has set a trial date for one of two men accused of ordering the 2005 killing of American missionary,Dorothy Stang. 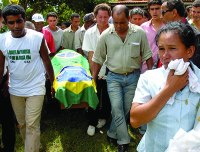 Judge Raimundo Moises Alves Flexa ordered Vitalmiro Bastos de Moura to stand trial on May 14 on charges of contracting Stang's murder following a land dispute in a remote region of Para state in the Amazon region, said court spokeswomen Gloria Lima, by telephone from the Para state capital of Belem.

So far three men _ the gunman, his accomplice and an intermediary _ have been convicted in connection with the 73-year-old nun's killing, but Moura would the first so-called "intellectual author" of the crime to stand trial.

"In similar cases that Amnesty has followed it seems like there's a vested interest in protecting the 'mandante' and to please public opinion the 'pistoleiros' are thrown to the wolves," said Patrick Wilcken, Amnesty's Brazil campaigner, using Portuguese terms to describe the crime's mastermind and hired guns.

A second rancher, Reginaldo Galvao, is also accused of ordering the killing but remains free on bail and has so far managed to avoid trial.

Wilcken said that the Stang case, with international ramifications, was being taken more seriously than when Brazilians environmentalists or union leaders are killed in the same circumstances.

The southern Para region of the Amazon rain forest where Stang was killed is notorious for land-related violence and the use of slave-like labor to clear jungle.

Ranchers are heavily entwined with local politicians, police and judges in the largely lawless region.

Over the past 20 years, more than 500 peasants, union leaders and activists like Stang have been shot dead but only 10 cases have ever gone to trial, according to the Roman Catholic Church.

Stang's brother David, who lives nearly Colorado Springs, Colorado, expressed concern in an e-mail that the trial would be overshadowed by the visit of Pope Benedict XVI, who is scheduled to wrap up a five-day visit to Brazil the day that Moura's trial begins.

Trials in Brazil usually last no more than 24 hours.

Stang spent 30 years of her life in the region building schools and defending poor settlers while teaching them to respect the rain forest. Her efforts earned her the enmity of ranchers in a region where hired gunmen routinely evict settlers on the strength of forged land titles.

The disputed patch of forest is near Anapu, a muddy town 1,250 miles (2,000 kilometers) north of Rio de Janeiro.