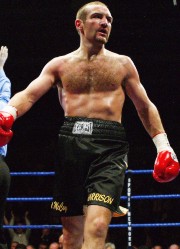 Harrison was detained on Oct. 6 in the southern city of Malaga and is in jail pending trial on charges of alleged car theft using violence and assaulting police officers, the Civil Guard said.

The British boxer has previously received treatment for depression and alcohol problems. He withdrew from his title defense in May against Gairy St. Claire after being arrested in a nightclub, reports AP.

Harrison, 29, was reportedly training in Spain ahead of his Dec. 9 fight against former European champion Nicky Cook in London.

In September, police charged Harrison with six offenses, including assault and fraud, related to incidents in South Lanarkshire, Scotland.