There are a lot of questions about why nearly 50 people had to spend nine hours stuck on a plane at an airport in Minnesota. 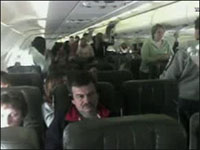 The passengers were stranded after their ExpressJet flight was diverted to Rochester.

Flight 2816 was traveling from Houston to the Twin Cities, but storms forced officials to send the plane to Rochester instead of Minneapolis-St. Paul International.

One passenger told 5 EYEWITNESS NEWS, once the plane arrived in Rochester they were not allowed to exit. They sat in the parked plane for nine hours, KSTP.com reports.

Passenger Link Christin told the US's Star Tribune that he couldn’t believe the airline was unable to figure out an alternative besides keeping the passengers on the plane for such a long time.

“This was a sardine can… It was a nightmare,” NEWS.com.au reports.

Christin says at least two babies were on board and they cried throuhgout the night.