Many people saved from Bangladesh's Cyclone thanks to evacuation warnings 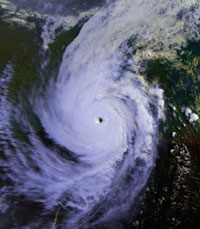 Many people saved from Bangladesh's Cyclone thanks to evacuation warnings

The evacuation warnings blared from loudspeakers tied to palm trees, from mosque rooftops and from megaphones balanced between bicycle handlebars.

In the days and hours before the devastating cyclone that tore through Bangladesh's coast last week, the performance of the early warning program was a rare bright spot in a saga of catastrophe, disaster management officials said.

In impoverished Bangladesh, where many government programs are inefficient at best, a system that used high-tech weather tracking satellites at one end and volunteers carrying bullhorns at the other operated impressively well, experts said.

More than 1 million people fled to shelters after hearing the warnings from radio, television and volunteers who rode motorbikes down potholed roads to alert villagers, according to Ian Rector, the United Nations chief technical adviser for Bangladesh's disaster program.

"The lives of tens or hundreds of thousands were saved because of the early warning and the mobilization," Rector said. "They did a fantastic job."

It's not that Sidr was weaker than those earlier storms - the 240 kilometer (150 mile) per hour winds were actually comparable, said Jamilur Reza Choudhury, vice chancellor of BRAC University in Dhaka. The difference was the early warning program and the country's response to it, he said.

Maryam Golnaraghi, head of the World Meteorological Organization's disaster risk reduction program, said if not for the warning system, the death toll from Sidr might have been on par with the Asian tsunami of 2004, which killed more than 230,000 people in a dozen countries.

"One really has to praise this country for putting this program together," Golnaraghi said from Geneva. "This is a real success story."

Mizanur Rahman, a logger from a devastated district along the Bay of Bengal, was one of those likely saved by the warning system.

After a volunteer told his village to evacuate, Rahman said he checked the skies himself and headed for cover.

"My wife and I gathered our two children and my old mother and we went to the shelter," said Rahman, whose wood and straw hut was destroyed. "We survived, but we have nothing now."

If Bangladesh was unprepared for previous cyclones, this time it had a strategy well in place.

The Bangladesh Meteorological Department tracked the storm while it formed at sea, issuing bulletins updating its progress. It sent the first evacuation order 27 hours before the storm's landfall, said Samarendra Karmakar, a top department official.

Then, the Cyclone Preparedness Center, a joint venture between the Bangladesh government and the Red Crescent Society, told its more than 42,000 volunteers across the country to warn villagers to head to shelters. The volunteers fanned out to isolated villages in vulnerable districts, using megaphones, mosque speakers and their own voices to alert communities at risk.

Many of those who fled their homes for safety took refuge in the roughly 2,000 official emergency shelters - hulking concrete buildings scattered across the country that can hold between a few hundred and 3,000 people.

Others spent the night in neighbors' sturdier brick and cement homes, or in unofficial shelters.

To be sure, the emergency warning system can still be improved.

Some people disregarded the evacuation orders because of a tsunami warning in September that never materialized, some villagers and experts said. And the first evacuation warning, issued the night before the storm hit, may have been premature, said Rector, the U.N. official.

The warnings also may not have reached some of the country's most remote areas, Rector added. The U.N. plans to survey islands and isolated villages to gauge the alert's reach.

But perhaps most worrisome was the shortage of emergency shelters. Choudhury said the country needs at least 1,500 more than currently exist.

"If we had more shelters, the death figures would have come down more," he said.

Rector said the shelters need to be built to withstand not just cyclones but earthquakes, storm surges, flooding, and other natural disasters that plague Bangladesh.