Republican Fred Thompson, the politician considering a bid for president, said he has lymphoma, a form of cancer. 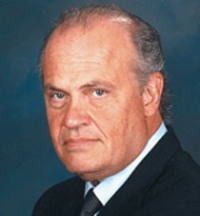 In an interview with Fox News, the former senator said he is in remission and the diagnosis should not affect his life expectancy.

Thompson, 64, told Fox News Channel that he has non-Hodgkin's lymphoma, but has not been ill or had any symptoms.

"I am in remission and it is very treatable with drugs if treatment is needed in the future," the Republican said in a statement to Fox.

Lymphoma is an immune-system cancer that strikes thousands every year. The vast majority have the non-Hodgkin's form of lymphoma, a term that encompasses more than 30 different subtypes of the disease.

Some of these subtypes are termed "indolent," meaning they typically respond well to treatment patients often go into remission for long periods, but the disease is not cured and may need to be battled again periodically.

The former senator is an actor who has played many roles, including president of the United States, director of the CIA, an admiral and currently, a tough district attorney on NBC television's "Law & Order