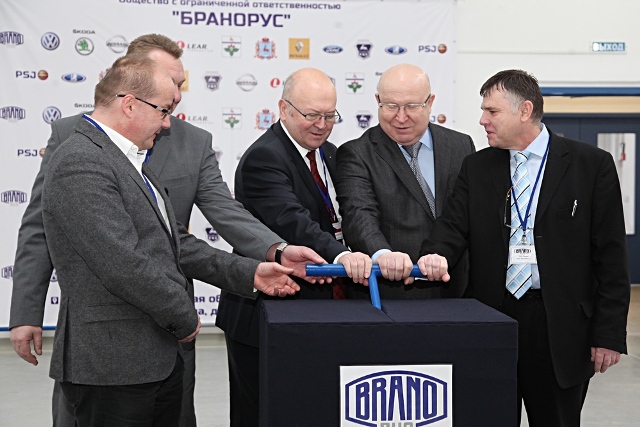 "In 2016, we plan to create at least 10,000 high-tech jobs in the Nizhny Novgorod region", the governor said after the opening of new production and warehouse facilities at LLC BRANORUS in Kstovo.

BRANORUS is a Czech company that has been producing automotive components in Kstovo since 1999.

Currently, the company makes locks for GAZell vehicles, brake and clutch pedals for Volkswagen and Skoda, as well as seat frames for Nissan Tiida.

"The history of relations between the Czech Republic and the Nizhny Novgorod region is a history of long and productive relations. This is the third facility with the participation of the Czech side in the region. I very much hope that despite external difficulties, our cooperation will develop. I do not know one single case when a Czech company would leave the Russian market for political or ideological reasons. We have constant interest in the local market," Czech Ambassador to Russia Vladimir Remek said at the ceremony.

According to Rosstat, in 2015, the Nizhny Novgorod industry showed strong growth against the  background of national industrial decline. The volume of the manufacturing sector increased by 2.8%, while the decline in Russia was reported on the level of 5.4%.

"We certainly look optimistic against the background of other regions of Russia. This became possible owing to our import substitution activities that the region began in 2009 by governor's order. I hope that in 2016 the region will keep its leading positions," the Minister for Industry, Trade and Entrepreneurship of the Nizhny Novgorod region, Alexander Makarov, said.

"In order to implement numerous ambitious social programs, one needs to have sufficient resources for that, and the only way to replenish them is to develop the real sector of economy - industry in the first place," the head of the region Valery Shantsev said.

"In the Nizhny Novgorod region, we have been working in this direction for a long time. We have been modernizing the existent industrial capacity while building new ones. It is important that we open at least one major production a year. In 2014, it was "RusVinyl," in 2015 - "A.Raymond Rus." We will preserve this tradition in 2016, as we are opening the new machine-building plant in Nizhny Novgorod. The plant will create 3,000 high-tech jobs in the region from the planned amount of 10,000 jobs."

Noteworthy, the new facilities of BRANORUS have marked the opening of the second innovative production in the Nizhny Novgorod region since the beginning of 2016.