Companies like Apple, Mozilla and Facebook are busy making it easier for third-party developers to build apps that extend the value of their products and platforms—but not Skype. 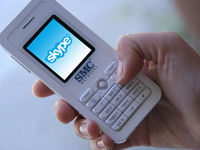 Application software is a computer program that functions and is operated by means of a computer, with the purpose of supporting or improving the software user's work. In other words, it is the subclass of computer software that employs the capabilities of a computer directly and thoroughly to a task that the user wishes to perform.

The VoIP provider has shut down Skype Extras, a program that let outside developers create hardware and software that worked with its service. Skype users will still be able to buy and run existing Extras (apps), and developers can still create new ones, since the company is keeping the coding tools public.

There’s a consensus that this is one of many tactics Skype is taking to trim costs (and possibly save jobs) before its new owners come in and restructure things. But is cutting off a developer community that can actually add value to the core Skype service a good long-term strategy?

Meanwhile, Om Malik argues that Skype has always had a lack of real support for app developers, which contributed to a lackluster Extras ecosystem. Indie developers like Cucku also say that Skype failed to promote or display the add-ons in a way that would attract more users, according to paidContent.org's report.