Boeing Co. the world’s second largest commercial aircraft maker agreed to pay $580 million for the Vought Aircraft Industries plant that makes sections of the 787 Dreamliner, an effort to gain more control over a project that has been beset by delays, Wall Street Journal reports. 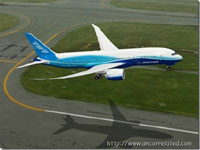 Chicago-based Boeing is buying the North Charleston, S.C., plant from Vought Aircraft Industries. As part of the deal, Vought will be released from obligations to repay money that had been advanced earlier, The Associated Press reports.

Reacting this deal Scott Carson, chief executive of Boeing Commercial Airplanes said: "Integrating this facility and its talented employees into Boeing will strengthen the 787 program by enabling us to accelerate productivity and efficiency improvements as we move toward production ramp-up," Reuters India reports.

Vought will continue its work on other Boeing programs, including building other parts for the 787, 737 and 747, Boeing said.

“The financial demands of this program are clearly growing beyond what a company our size can support,” said Elmer Doty, president and chief executive officer of Vought Aircraft Industries.

The 787 was postponed for a fifth time June 23 so engineers can design reinforcements for sections where the wings join the body of the plane. Composite layers in those sections separated during ground stress tests, Bloomberg reports.