Adobe Systems Inc Chief Executive Shantanu Narayen said on Tuesday that he might review his company's full-year revenue forecast if there is a significant downturn in the U.S. economy. 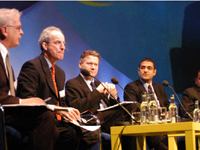 "For the revenue (forecast), if there is a significant downturn in the U.S. beyond what we have today, we will have to reassess what that means for our business," he said in an interview.

He made the comment after the world's biggest maker of design software reaffirmed a previous forecast that revenue would grow 13 percent in its current fiscal year from $3.2 billion in fiscal 2007.

Adobe was founded in December 1982 by John Warnock and Charles Geschke. The company name Adobe comes from Adobe Creek, which ran behind the house of one of the company's founders. Adobe acquired its former competitor, Macromedia, in December 2005.