Investor confidence in Germany unexpectedly rose for a second month in March, adding to evidence Europe's largest economy is coping with the euro's appreciation and a U.S. slowdown. 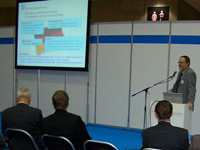 The ZEW Center for European Economic Research said its index of investor and analyst expectations rose to minus 32 from minus 39.5 in February. Economists expected it to fall to minus 40. The gauge reached a 15-year low of minus 41.6 in January.

The euro rose to a record after ZEW supported a series of reports showing Germany's expansion is holding up and European Central Bank council member Axel Weber said there's "no room'' to lower interest rates. Business confidence grew for a second month in February, industrial production increased more than expected in January and exports jumped 3.8 percent.

German companies have increased efficiency and reduced labor costs, helping them to remain competitive even after the euro gained 18 percent against the dollar in the past year. Unemployment is at the lowest level in more than 15 years.

The euro rose almost a cent after the report, to close to $1.55.

"Survey respondents expect the economy to recover from September,'' said Sandra Schmidt, a senior economist at ZEW. "That means we'll see an improvement from about mid-year.''

Still, with the U.S. fluctuating on the verge of a recession and oil prices above $109 a barrel sapping consumers' purchasing power, the economy of the 15 euro nations is losing momentum.

The U.S. lost jobs in February for the second consecutive month, the Labor Department said March 7, adding to evidence that the world's biggest economy dwindles.

The ZEW index "is forward looking, and there's hope that the U.S. fiscal package and interest-rate cuts will help revive'' the U.S. economy, said Rainer Guntermann, an economist at Dresdner Kleinwort in Frankfurt.

The U.S. government has introduced a $168 billion economic stimulus package to boost consumption and the Federal Reserve has reduced borrowing costs five times since September.

Lower U.S. interest rates relative to Europe have helped drive the euro to a record against the dollar, threatening to curb European export growth.

Germany's benchmark DAX share index has dropped 20 percent this year, the biggest decline among major European stock markets, on concern that a possible U.S. recession will spread to Europe and hurt company profits.

Heidelberger Druckmaschinen AG, the world's largest maker of printing machines, last month reduced its annual profit forecast after a drop in third-quarter earnings. The company said a weaker dollar hurt margins and some U.S. publishers are holding back investment because they are worried about a recession.

Some economists guess that what started as “a credit crisis in the U.S. will spread to the real economy in Europe soon.'' At the same time, surging oil prices are pushing up energy bills. Crude oil rose above $109 a barrel for the first time today and is 85 percent more expensive than it was a year ago.

The International Monetary Fund said Feb. 27 that the U.S. slowdown and "weaker'' world trade will curb Germany's expansion. The economy may grow 1.5 percent this year after 2.5 percent in 2007, the Washington-based fund said.